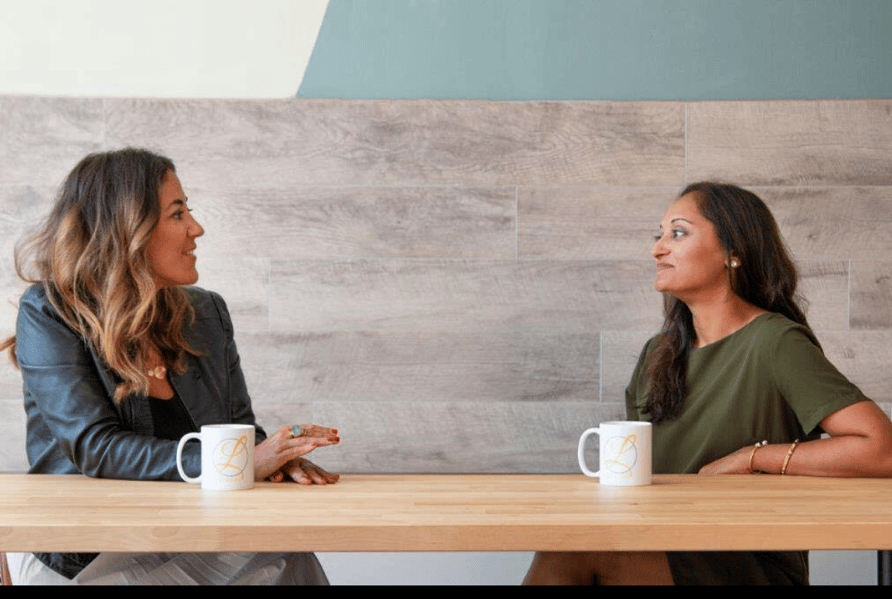 This article originally appeared on Swaay.com.

"It’s like a female golf course,” says Cate Luzio explaining the 15,000-square-foot NoMad space she created as Luminary; a co-working facility for women that acts as an inclusive community for professional development and personal networking.

Last March, Luzio traded in 20 years of banking after a conversation with her lifelong mentor. He suggested that banking wasn’t how she’d spend the rest of her life and while Luzio dismissed his prophecy at first, she realized she did have a greater vision. So Luzio locked herself up in her apartment to fulfill it; producing a business plan for a space that would be the go-to collaboration hub for women in New York City.

“I was tired of having coffee after coffee with women who wanted to learn about banking,” says Luzio on the need to create a place where women could confide in one another. She wants members to feel comfortable in approaching other women who aren’t necessarily in their same career path. “I never would have met someone in media when I was in the banking world,” shrugs Luzio in reference to me, ironically, over coffee. “It’s a way for people to build their network, to break down barriers.

So the story goes, Luzio spent a week in her apartment, pajama-clad, creating a business plan for this kind of inclusive community, where women could not only have a desk, but a sense of belonging—which for Luzio, also meant self-funding the project to control all variables.

“Self-funding is important to me because it ensures that we stick to, and realize, our vision, build out the space quickly, and make the decisions that are in the best interest of the company from the beginning,” says Luzio.

As a first-time founder, Luzio admits her banking background was critical in developing an efficient, long-term business plan. This included a detailed breakdown of both initial funding and long-term finance goals, as well as programming and development in cross-industry verticals.

Not only did self-funding allow for rapid action on the business plan, but Luzio also felt it was a commitment to her future members. “I want to put my money where my mouth is and invest to address the issues that women, including me, experience, while creating greater opportunities and enriching experiences for women,” she says.

Along with presenting opportunities for future Luminary members, Luzio was committed to investing in opportunity, which began with the women-founded, women-led, local businesses she collaborated with to stock Luminary’s kitchen with wine on tap, nutritious food, and decorate the walls to match her sophisticated, minimalist design.

“Working with Ancolie, a woman-founded restaurant in the West Village to William Ris Gallery, a woman-owned gallery in the North Fork… I’m surrounded by such a supportive community that brings me new ideas and puts inspiring women on my radar everyday.”

As a way to encourage and foster these cross-career relationships, Luzio targets the modern, inquisitive woman, who she says is difficult to define. “It’s hard to categorize today’s woman with labels and we don’t want to; we want to be inclusive regardless of who you are or what you do, or don’t do.”

In order to emphasize inclusivity, Luzio explains her idea to create a community board near check-in as a way for members to advertise their presence on a particular day. “If you’re busy on a given day, you don’t have to,” she reassured.

This concept was formulated from Luzio’s former experiences at coworking spaces, where she didn’t interact with other members; she never knew who she was sitting next to. She recognized the lack of opportunity to foster member relationships as a flaw in other coworking environments, and this is how Luminary was initially conceptualized.

Additionally, while she notes her open personality, she recognized some women aren’t as extraverted and therefore may never turn to their neighbor and introduce themselves so the board is a way for staff to say, “hey, this is who is here, if you’d like to meet them, we will personally introduce you”—eliminating social anxiety and emphasizing meaningful connections.

The rest of the space is thoughtfully designed, including a fitness room to host studio classes, such as pilates and yoga; a meditation room; a lactation room; five boardrooms with Smart TVs; “huddle” rooms for smaller meetings (men are allowed for any meetings or events so co-ed teams don’t need to worry); phone booths for personal calls; and a rooftop—all of which are available to book for private events.

“We are going to have a slate of weekly programs from enriching workshops, panels and office hours with top executives and experts, in-residence coaching and a monthly speaker series to express fitness/wellness classes and social events,” says Luzio, adding that the monthly speaker series will launch in December with one of Luminary’s Founding Members, Ruth Zukerman, co-founder of SoulCycle and Flywheel. “If our mission, community and space speaks to you—we encourage you to join us,” she says.

Luminary officially opens its doors on November 14, 2018. You can find more information on membership rates and programming here.