The Pivot Playbook: How to Successfully Manage Career Transitions

October 13, 2020 | By Cate Luzio For Worth Magazine | News
In her latest ‘Lonely CEO’ column, Cate Luzio discusses how to figure out what’s next for your career. 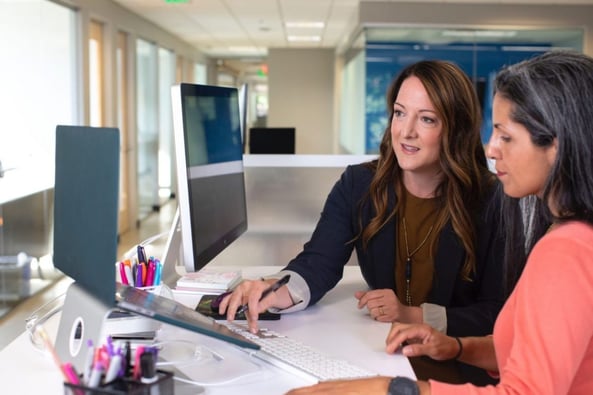 As a relatively new entrepreneur and someone who spent the better part of 20 years building my career in finance, I’m often asked how and why I pivoted to launch my own company. Was there a pivotal moment or conversation that made me want to step away? Was I looking for something more fulfilling in my career? How did I get the courage to make such a big transition? Many of us reach the point in our lives and careers where we want to make a change but are looking for a roadmap to guide us. Whether your career progression has stagnated, priorities shifted or you’re looking for the ability to make a greater impact, the idea of a pivot can seem exciting but also overwhelming. Many women seek to move in a completely new direction but are not sure where to turn. What do you when there’s no pivot playbook to guide you?

“I spent 15-plus years working in fields of construction, architecture, project management and systems. I loved architecture and construction and I knew I wanted to be of service to people, but it wasn’t completely clear who those people were yet. I was certain though: I didn’t like using my creativity to climb the corporate ladder,” says Jean Brownhill, founder and CEO of Sweeten, a home renovation service founded in 2011 that matches every project with vetted general contractors. Brownhill spent several years in design and project management with architectural firms, and later, in global architecture for Coach, where she developed web platforms for the construction of stores globally. “It was when I renovated my own house and had a frustrating experience, I found that it was homeowners, like myself, that I wanted to help—those who didn’t have huge budgets but who saved up to buy a house and wanted to turn it into their dream home,” adds Brownhill. In order to expand outside our comfort zones and determine a new direction, it’s important to build on skills, networks and your past experience as tools to guide you when pivoting or making a transition.

Making a change in your career does not always equate to starting your own company or even leaving your existing company for that matter. Many find success in pivoting within their own organizations by taking on new roles or moving to new locations. Pivots can take many forms, including within an industry into different roles or transitioning to a new industry completely, leveraging skills you’ve acquired along the way—repackaging yourself. Careers are no longer linear. Cate Khan, cofounder and chief strategy officer of Verishop, an e-commerce platform that launched in 2019 with a mission to bring inspiration, discovery and entertainment to shopping, has had a career full of pivots, taking on new challenges in every role or company where she’s worked. Because of these pivots, she has had a pretty diverse path. “After business school, I spent six years in brand marketing at L’Oreal and then Avon. I pivoted my career to e-commerce and joined an Amazon subsidiary as the general manager of Diapers.com and later as senior VP of retail at Quidsi. During my tenure at Amazon, I ran retail teams across buying, merchandising, marketing, strategy, analytics and creative,” Khan says.

After seven years at Amazon, Khan realized she missed the energy and nimbleness of startup life, which existed when she started at Diapers.com. And, she wanted to create deeper impact with a better customer experience, particularly in combining the best of social media-based browsing with an exceptional online shopping platform. “Leaving Amazon was bittersweet. I had spent years building up my network and establishing strong equity amongst senior leaders. But I was craving an environment where I could make faster and more impactful change,” Khan explains. Part and parcel to pivoting is the ability to see opportunities past the challenges and risks that are first presented. Armed with a diversified skillset, a broad network, and along with her husband, Khan’s cofounder and Verishop CEO Imran Khan, she was ready to take the biggest risk of all and launch her own company.

“My six years at L’Oreal and Avon in brand marketing with high touchpoints in product development allowed me to gain solid fundamentals in brand building, media, go-to market execution and consumer product development,” Khan says. “These skills were immensely helpful as we developed our own incubated products and shaped the Verishop brand.”

While careers aren’t necessarily straight lines, investing in your core competencies and playing to your strengths and background are also critical in your career development, which ultimately may still lead you down a similar journey. “I was a retail pharmacist for about 11 years before Capsule. I had functioned in a variety of roles from a staff pharmacist to pharmacy manager and eventually worked for the Walmart system troubleshooting underperforming pharmacies on a regional basis. I come from a family of pharmacists, including my father, so pharmacy runs in our blood,” says Sonia Patel, chief pharmacist at Capsule, a health care technology business rebuilding the pharmacy from the inside out. Patel saw firsthand the many pain points in the retail pharmacy experience—out-of-stock medications, long wait times, nonstop insurance issues, the inability to talk to a pharmacist when you have questions—and she wanted to fix it.

“I went to school and became a pharmacist because I wanted to help people,” Patel explains. “As a retail pharmacist, I was punching the ticket every day and helping a big company make more money. I hit ‘the wall’ and knew if I really wanted to make an impact, I was in the wrong place.”

Patel used the skills that she had cultivated while working for Walmart in order to build the company alongside Eric Kinariwala, Capsule’s CEO and Patel’s friend prior to launching the business. The skills that Patel built throughout her career helped her to see the problem and the opportunity in the industry and, more importantly, how Capsule could change the entire experience for the better. “I used all the knowledge I had developed about pharmacies in my previous roles and was then able to create a ‘playbook’ for building Capsule. I used my intrapreneurial skills to become an entrepreneur myself,” Patel says. Accessing her pharmacy background, transferrable skills and an entrepreneurial mindset fostered in her corporate life helped Patel open the door to entrepreneurship and her career pivot.

For most, overcoming the challenge of making a pivot is a difficult one. Fear and lack of confidence are two major hindrances in any career transition. Getting comfortable with the uncomfortable is part of the pivot process. “I didn’t go to business school, take a marketing class or have a fancy bio. I was uncomfortable in meetings at times and just didn’t [have] confidence on some days. But over time, I realized that it was OK to feel this way. I was learning and I could take what I knew well and teach others. I continued to push myself every day no matter how comfortable I felt. I had to gain the confidence I needed to be successful,” Patel says. She had to regularly remind herself that she pivoted to make an impact, to learn and grow and create change. Khan has a similar view: “I feel like all of my job choices have intentionally and unintentionally led me to this point. I’m thankful for all the experiences I’ve had in prior roles because today I’m better able to understand parts of our business, as well as have a strong bias for action.” Khan leaned into the skills she built and honed in order to execute a business plan that allowed Verishop to launch in six months, over-reach revenue targets and launch disruptive technology in the industry in record time. “We could not have moved as quickly as we had without the strong e-commerce fundamentals that I gained while at Amazon,” Khan adds.

Often fear of the unknown, a lack of courage or just not being able to figure out “what’s next” holds us back from taking steps to pivot or transition. However, Brownhill would argue to go for it. “I had found my calling and once that happens, leaving your past doesn’t seem scary. It feels inevitable,” she says. Patel adds, “I pivoted to be uncomfortable. If I spent my life only doing things that I felt comfortable doing, I would never grow and get where I needed to be.” As a woman who pivoted myself, I agree. Build on your background and experience; that’s the pivot playbook you’re looking for. The only things you’ll regret are the risks you didn’t take.